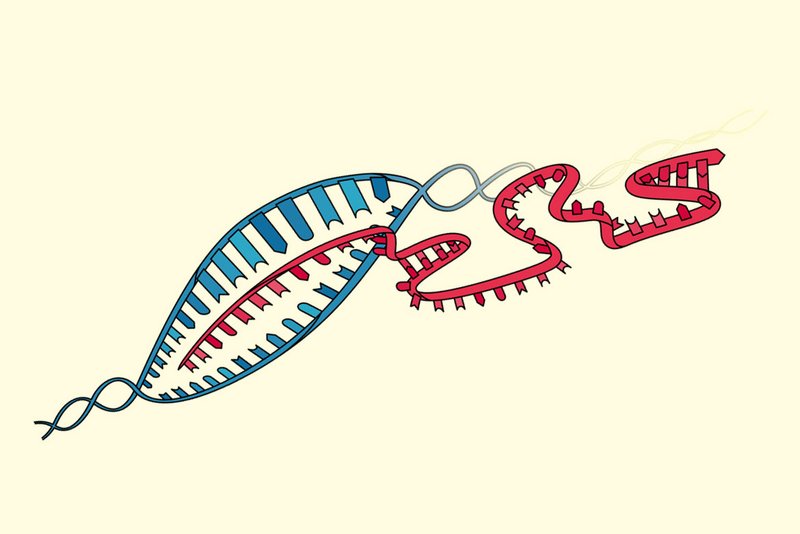 RNA (Ribonucleic acid) and DNA are both nucleic acids and their structure is similar, though RNA has a single strand compared to the double helix of DNA. Up to now, RNA has been assumed only to play a supporting role. For example, messenger RNA transports the blueprints for proteins out of cell nuclei. But in recent years, science has been discovering many new forms of RNA that carry out essential functions in cells. And previously reported forms of RNA are proving to be more important than first imagined. “In gene expression, all the action occurs on the level of RNA”, says Oliver Mühlemann, the head of the Swiss National Center of Competence in Research ‘RNA & Disease’. This is why RNA is also central to many innovative therapeutic approaches – both as an active agent and as a point of attack.

CHOLESTEROL: Regulating the lipometabolism
RNA type: Micro-RNA
Some 25 years ago, tiny RNA pieces were discovered for the first time in cells that bind specific types of messenger RNA and thus block the production of proteins. This micro-RNA plays a role in many metabolic processes. For example, the micro-RNA miR-33 regulates at least ten genes involved in lipometabolism, the metabolism of fats. In a mouse model, blocking the effect of MiR-33 promotes the creation of ‘good’ cholesterol and reduces arteriosclerosis. A research group led by Jonathan Hall at ETH Zurich is investigating what role micro-RNA plays in the development of other diseases such as cancer.

HEART DISEASES: A blood test reveals the muscle state
RNA type: Long, non-coding RNA
After a heart attack, the heart tissue has to regenerate. So-called long, non-coding RNA strands are involved in this. Medical experts believe that these strands could in future help with predicting recuperation and with diagnosing chronic heart problems. Up to now, already more than 50,000 examples of this long RNA have been discovered in different organs, though their function has largely remained a mystery up to now. At the University of Bern, a working group led by Rory Johnson is developing a method to find out more about these strands of RNA.

CANCER THERAPY: Early success control
RNA type: Ribosomal RNA
The earlier we know whether chemotherapy is working, the better it is for the patient. The Canadian biotech company ‘Rna Diagnostics’ has developed a method that can determine the success of a therapy after just two weeks, by analysing the ribosomal RNA in the tumour tissue. When the RNA needed to create proteins is damaged, it means that the tumour tissue will also die. But if the ribosomal RNA is intact, it means that the drug isn’t working, and the doctors can quickly switch to an alternative therapy. This method is being tested against breast cancer.

VACCINATIONS: Swift and personalised
RNA type: Messenger RNA
Combatting viral infections: Vaccines generally contain parts of pathogens. These are called antigens, and they trigger an immune response in the body so that it can defend itself in later cases of infection. But now we can do this differently. Instead of an antigen, the new vaccine only contains its blueprint. With the help of this blueprint made of messenger RNA, the body’s own machinery produces the antigen itself and vaccination proceeds as per usual. Such RNA vaccines can be produced much quicker and much cheaper than conventional preparations, says Steve Pascolo, the head of ‘Messenger-RNA Platform’ at the University of Zurich. Many such vaccines – such as one against the zika virus – are already in the phase of clinical tests.

Against cancer: a personalised vaccination against cancer would function the same way. To this end, proteins on the surface of the cancer cells are identified that are characteristic of the tumour in question. The messenger RNA with the blueprints of these antigens would be given to the patient, who will then develop a specific immune response to the tumour cells. According to Pascolo, this procedure will soon be authorised for use against skin cancer.

HEREDITARY DISEASES: Outwitting pathogens
RNA type: Small, artificially created pieces of RNA (oligo-RNA)
Spinal muscular atrophy is a hereditary disease that is often fatal. Those affected make too little SMN protein on account of a genetic defect, and it leads to muscle loss. The active agent Nusinersen was approved for use in Switzerland in 2017. It comprises small, artificially manufactured pieces of RNA that bind themselves to specific parts of the blueprint of the messenger RNA of a similar gene. This transforms that gene, which is then able to create the SMN protein. Swiss researchers are developing a similar therapy for the hereditary disease erythropoietic protoporphyria, in which a faulty protein means exposure to light can cause intense pain.

LEUKAEMIA: Gene therapy for immune cells
RNA type: A modified RNA virus
Tisagenlecleucel was developed by Novartis and has been approved for use against specific forms of leukaemia in Switzerland since 2018. In this gene therapy, doctors isolate immune cells from the blood of a patient. These cells are reprogrammed and returned into the patient by means of an infusion, where they help to recognise and destroy cancer cells. A harmless lentivirus is used for the genetic reprogramming of the immune cells. It contains a blueprint for a recognition protein in the form of RNA (a CAR T receptor), which is integrated permanently into the cells’ genetic material.

This article was published in "Horizons" under the CC BY-NC-ND licence on March 5th, 2020. Author: Yvonne Vahlensieck