Whenever the cell requires a certain protein, the gene for this protein is transcribed into a messenger molecule, the mRNA (messenger ribonucleic acid). This copying process - called transcription - requires a specific enzyme, the RNA polymerase. The mature mRNA is then translated into the protein by a ribosome. This process is termed translation. This flow of genetic information from DNA to RNA to protein takes place in all living organisms and is therefore (almost) universal. This sequence of events is therefore also known as the "central dogma of molecular biology".

During cell division, the DNA is duplicated. After division, both cells contain the complete genetic information. This process is known as DNA replication. 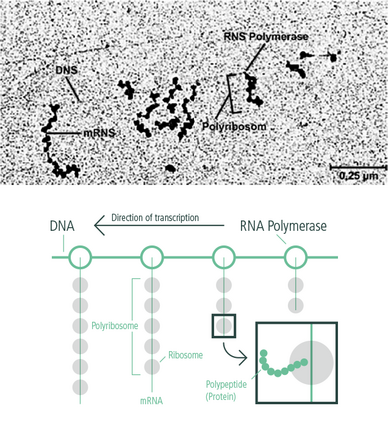 This figure was published as early as 1970 (Miller OL Jr et. al. Science 1970) and shows an Electron Microscopy image of a bacterial genome that produces RNA and proteins in a coupled process.

© Miller, Science 1970.
Courtesy of the AAAS (American Association for the Advancement of Science).

RNA has a very similar structure to DNA. However, while DNA contains deoxyribose as sugar, ribose is found in RNA instead.

Nucleotide: Single building block of RNA consisting of a phosphate group, a ribose and a nucleobase.

The RNA also consists of the nucleobases adenine (A), cytosine (C) and guanine (G), but instead of thymine (T) contains the nucleobase uracil (U). In contrast to DNA, RNA is often present as a single strand.

The four nucleobases in RNA:
A = adenine
U = Uracil
C = cytosine
G = guanine

Only 2% of the human DNA encodes for proteins, but up to 95% are transcribed into RNA. According to various studies, the proportion of non-protein-coding DNA increases with the complexity of the organism. You can find more information here.

The information for the production of a protein is stored on the genes in a sequence of so-called triplet codes (codons). Each codon consists of three nucleobases and codes for one of the 20 amino acids present.

Rules are meant to be broken - even in nature. 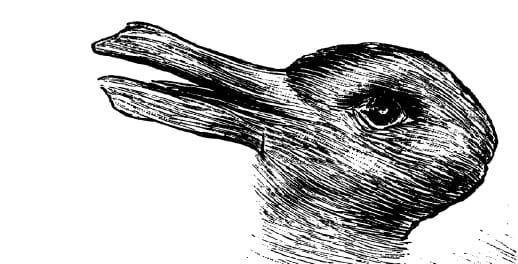